In the new e-book, Junsado Fundamentals, Standing and Ground Combat, Sang H. Kim teaches you how to neutralize and destroy your opponent in standing and ground confrontations, including realistic, no-nonsense strategies against tackles, head locks, chokes, arm locks, punches, grabs, low kicks, sweeps, throws, pins and a variety of strikes. 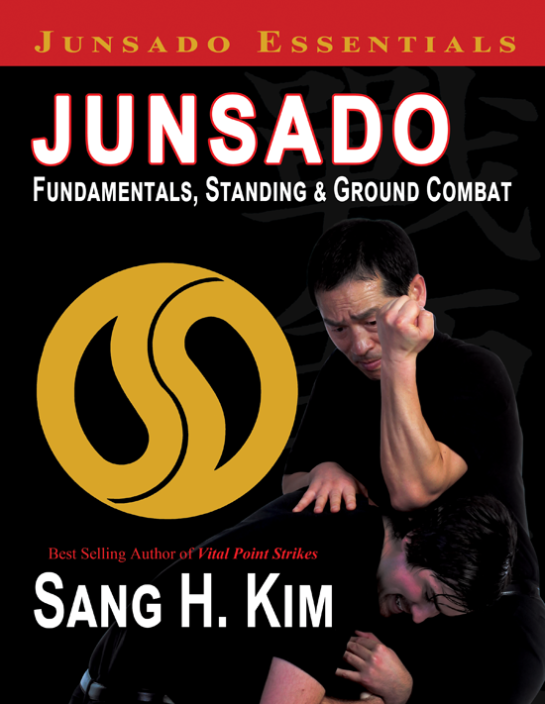 Developed based on the popular Junsado videos and DVDS, along with valuable feedback from the Junsado practitioners from all over the world, this is the first book in the Junsado Essentials Series. Over 50 standing and ground combat scenarios take you through a wide range of possible attack and defense situations to improve your fighter’s instinct. In addition to demonstrating a practical defensive strategy, each scenario illustrates a key Junsado principle in action, building your ability to apply fighting principles across a wide range of situations.

Junsado, literally translated as The Way of Combat Expert, is known for its versatility and adaptiveness in fighting. It has its origins in late 1970s and early 1980s, created by Sang H. Kim during his service as a South Korean counter-intelligence agent. Today it is a dynamic and direct fighting style that can be applied to stand-up and groundfighting situations in the ring and on the street.

The following article is a direct excerpt from the book Combat Strategy: The Way of the Warrior

Combinations vary according to the force you apply. Force is an internal characteristic that is defined by the direction you move, and is not readily evident to an observer. It can be obvious, as in unified force combinations or deceptive as in opposing force combinations. 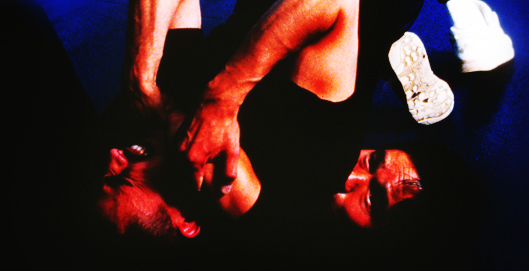 Unified force combinations are groups of skills that apply continuous force in a single direction. Every strike serves to magnify the effect of the previous one. Strikes can be the same such as a flurry of punches to the body or they can be diverse like a variety of linear and circular kicks aimed at the legs of the opponent. 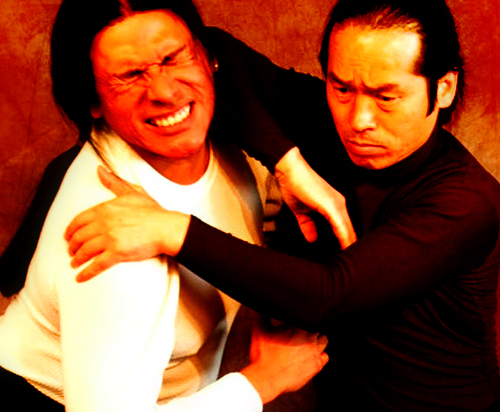 Circular force combinations are combinations that apply force that rotates around an axis. The axis is located at a point on your body, as close to your center of gravity as possible. The force is then directed to the target by two terminal points on your body, usually your hands or feet. The resulting effect is the magnification of both applications of force.

The first application of force, whether by striking or grappling, will always intensify the second. In striking, the second strike is intensified by the centripetal force generated by the first. For example, a backfist to the face, followed by a hook kick to the leg and a back kick to the groin will create a continuous 360 degree circle with one technique leading directly into and intensifying the next. END_OF_DOCUMENT_TOKEN_TO_BE_REPLACED

In series of 2o short instructional videos, Sang H. Kim  teaches a variety of ways to use wrist clocks for close quarters self-defense.

I am a lifetime marital artist and former combat instructor in Special Forces. I have developed, written and taught combat and self defense courses around the world to more than 100,000 students and instructors. Even after more than 35 years of experience in martial arts training and combat survival experiences, every time I enter an unknown environment, I always question myself on “What if…”

No matter how experienced you are in the martial arts or how confident you feel in defending yourself, awareness is a far more powerful weapon than any other skills you practice in the training hall. Don’t be an easy prey. Watch for signs that signal danger during the following stages of interacting with a potential assailant.

Approaching is the first sign of potential danger. An assailant may walk toward you casually, follow you from behind or jump out of nowhere. This is the time for you to prepare for avoiding the assailant or running away.

Remember: Don’t Run Away from Danger; Run to Safety. You don’t need to beat or defeat an assailant – there are no winners in self-defense. Your only goal is to escape safely.

If you feel even slightly uncomfortable about a person approaching you, do not allow the assailant to get closer than 5-6 feet. If necessary, give a stern verbal warning such as “Stop there” or “Don’t come any closer.” END_OF_DOCUMENT_TOKEN_TO_BE_REPLACED

Wrist locks are the most useful techniques in subduing your opponent. Often you may encounter situations in which you cannot throw kicks or punches at all but you must take the other party under control. Wrist manipulation is one of the ultimate methods in subduing and controlling locks. Since the wrist is full of vital points, once you know how to do the techniques properly, you can take complete control of attackers without causing permanent damage. Wrist locks are especially good for law enforcement officers. 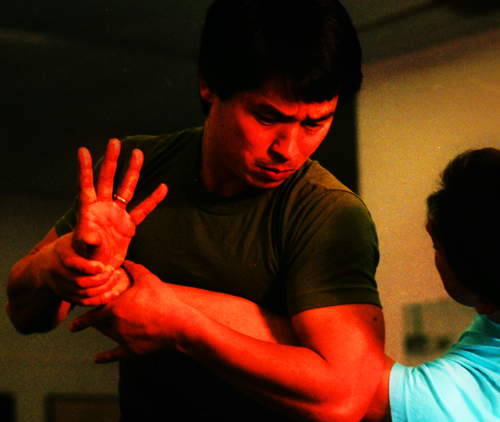 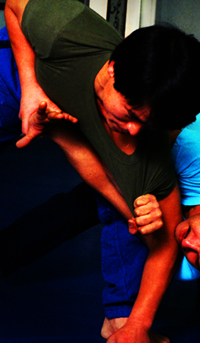 You need to develop strength of your thumb and fingers along with your forearm muscles in order to be effective. You can develop them by specific training methods such as weight training and sand bag pressing.

If you want to learn wrist lock techniques, the Wrist & Arresting Locks video contains techniques from the most basic grip to advanced techniques such as arm bar, wing twist, pinion on the ground to immobilizing the opponent completely. Sang H. Kim explains every step of the training very thoroughly.

Arresting techniques are very different from the usual fighting techniques that you use against an opponent. When you compete or fight for self-defense you and your opponent are on equal footing. However, in arresting, you cannot be in equal to your opponent. You should always be one or two steps ahead in thinking and positioning. You should be able to move in properly before your counterpart figures out what your next move is. By the time your opponent realizes what you are doing, you should already been in control of him. 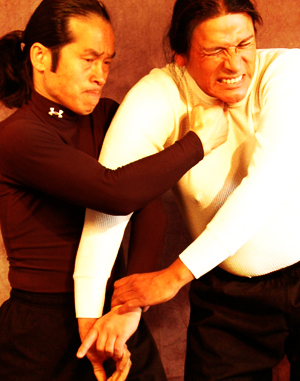 The knowledge of arresting locks opens up a new insight into the vulnerability of the techniques that your opponent might use. When you know arresting locks, you can take control of the situation no matter what an attacker might throw at you. They also enable you to take immediate control of your attacker’s weapon if necessary and use it against him.

There are three positions that you want to move into to arrest your counterpart: behind him, on the side of him, or take him to the ground while you remain upright. Once you secure one of these positions you should be able to control his joints in various ways so that you don’t lose control over him until you have completely immobilized him.

Arresting locks are effectively applied to both empty handed attackers and armed attackers. Since the arresting locks are geared to manipulating the body into inescapable positions, once you know how to do the techniques properly, you can take complete control of attackers without causing permanent damage.

Here are a few suggestions to enhance your knowledge of locking up your opponent with ease. END_OF_DOCUMENT_TOKEN_TO_BE_REPLACED

The following article is based on the principles and techniques taught in the Knife Defense videos.

Much has been written  about the effectiveness of one system or another in a realistic or “street” situation. Many styles claim to be scientifically designed or to have secret techniques to defeat even the toughest of opponents, including armed assailants. Yet when it comes to an assailant armed with a knife, you don’t need to learn a lot of fancy, secret techniques, you only need to remember four simple options. In an armed confrontation, basic is best and the most direct techniques are the ones that will give you the opportunity to walk away when it’s over. 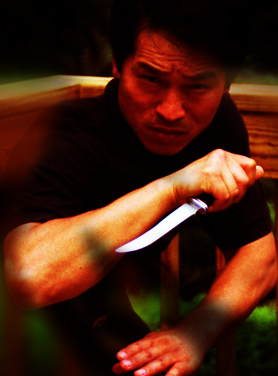 To retreat is generally seen by the opponent as a sign of cowardice. You are too afraid to fight or you are unable to match your opponent’s strength, so you step back to avoid being drawn into a confrontation. However, the retreat can be a smart initial move since it gives you a chance to measure your attacker’s seriousness and prepare a strategy. And there is always the chance that when you signal a retreat, your attacker will back off enough to let you escape. This is, of course, the safest and most intelligent way to defeat an armed attacker. It is also the least likely outcome. END_OF_DOCUMENT_TOKEN_TO_BE_REPLACED